The 1982 documenta was probably the last big exhibition to be organized without the help of fax machines. I don’t know why, when I at the request of Mr Helmut Plate think back to our enterprise in Kassel, this is the first thing to come to mind. Sometimes, though rarely now, they ask me to talk about my experiences; and when I tell the audience (of young and aspiring curators maybe, floating now in their luxury of 24 hours e-mail communication) about the absence of the fax, they look at me with a mix of horror and pity on their young sweet faces. But there is something of a moral to my memory: the mise-en-scène of documenta 7 was not organized through communication but through face-to-face conversation. This is an important fact of circumstance. With my friend, the designer and architect Walter Nikkels, I worked week after week on the lay-out of the exhibition architecture. Often we were joined by Johannes Gachnang and Gerhard Storck, the members of the curatorial team who, months before the exhibition, were most often present in Kassel. Nikkels was making sketches on sheets of paper (we had no computer) and we were making comments and, occasionally, we would draw our suggestions in Nikkels’ drawing. These were intense sessions of conversation. While we were making and adjusting drawings we had the mise-en-scène rather precisely in our minds – even if we quarelled about details. That, how-ever, was the conversation. It was a slow process (with wine and tobacco) but I firmly believe that the slowness of our extended conversation contributed very much to the eventual intimate quality of our exhibition design.

We wanted only a very few artworks in the open, on the Friedrichsplatz or in the Karlsaue. There had been too many in the previous documenta. I thought of inviting Joseph Beuys for an outside project because I wanted him to make a great sculp- ture – and not, as before, a podium for political discussion. Our documenta, that was the basic premise, was to be about the affirmation of art: a dignified endeavour of its own that needed no social or any other justification. Something like that – and even lovely Bazon Brock, happily our philosopher in residence, agreed to our ambition.

I first talked to Beuys on the telephone and asked him whether he could not make a fountain. He was adamant. A few days later he called back and said he would like to plant 7000 oak-trees. I said, immediately, yes Joseph, why not. I had no idea how this could be done, or to what cost, but I remember dist­inctly that the idea struck me as an irrefutable artistic enterprise. The sheer scale of the thing was absolutely beautiful. Shortly afterwards I met Beuys to discuss the scheme in more detail. And it was in these coversations that the project took shape and began to appear realistic. Maybe the first meeting was at his house in Düsseldorf. I can’t remember because, in the almost two years of preparation for documenta 7, I often used to drive between Kassel and Eindhoven (Holland) where I lived – and regularly I would make a stop in Düsseldorf at Beuys’ place. He would make coffee and a sausage sandwich and we would talk – about many things and not only about the oak-project. These conversations are a cherished memory. So in retrospect I cannot remember precisely were and when I met the great man, one of my heroes, as I also met him often in Kassel. My memory here is blurred.
Surely the financing of the project we discussed officially in Kassel. It was not an easy project. Beuys wanted next to each oak-tree a basalt stone: the 7000 oaks were to 7000 monuments to nature. Beuys had again, and brilliantly and artistically perfect, turned the project into a political campaign. I don’t quite remember when the great slogan

„Stadtverwaldung statt Stadtverwaltung“ came about but it appeared quite early.
In our own budget we had, for each of the outside project, allocated the sum of DM 150.000. Additional funds had to be found elswhere. I take that money, said Beuys, and the other financing is my own business. Later he came up with the idea of certificates. People could underwrite the project for DM 500 and get a signed certificate. That worked to some extent. But in the course of the project that continued years after the documenta 7 was closed, he worked hard to find sponsors. At one point he made publicity on Japanese television for Japanese whisky. There was nothing wrong with that, he told me, I appeared on screen with my hat on, holding up a glass of whisky and saying: this is pure nature! Telling me this he laughed. But I didn’t do anything wrong, did I, it was a good and pure whisky and they paid me half a million dollars.
There was also a meeting with Hans Eichel, then mayor of Kassel and president of the documenta. He had somehow to approve the gamble – and put us into contact with the authorities in Kassel who had to organize the permissions for us to plant trees. It was then when we met these officials that the genius of Beuys’ scheme, and its political acumen, really came to light. I remember meetings in some office with a number of burocrats. I would like to plant my trees along this street, Beuys would say. They objected: there are electricity cables in the ground. Well, Beuys would say, what about one meter to the left. Oh, but there are the water mains. How about then, said Beuys, still further to the left? He was accomodating and firm. The director of parks of the city of Kassel, the tree-planting specialist, would say to Beuys that in the meagre city soil the trees would not grow. Beuys, with endless patience, would counter such arguments with, to my surprise, expert knowledge about tree-planting in urban surroundings. A major aspect of this project, of all his art really, was challenging authority and expose authority as traditional and conservative.

There are many other memories. I am proud to be associated with a great work by a great artist. The work was great be- cause it also was instinctive. Remember this: on the very day that we, in Kassel, in a press-conference announced Beuys’ documenta contribution, the magazine “Der Spiegel“ came out with a disconcerting cover-story: “Der Wald stirbt.“ What more then can I say? I rest my case. Not so long ago I drove through Kassel and I saw the oak-trees, well-grown and swaying in the wind, next to their basalt stone – and I was happy. 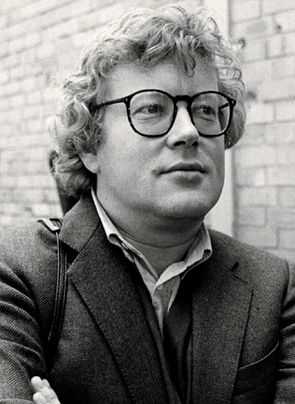 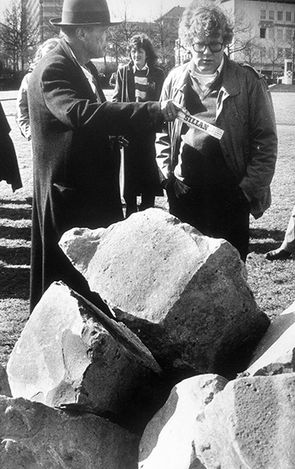